The European and Global Covenant of Mayors

What are the European and Global Covenant of Mayors?

Written by Julie Colback
Updated over a week ago

The Covenant of Mayors is globally the largest urban climate and energy initiative. Below you will find more information on this EU initiative: the background, mission and vision, as well as the achievement data.

The Covenant of Mayors was launched in 2008 in Europe and has the ambition to bring together local authorities that voluntarily commit themselves to achieving and even superseding the climate and energy objectives of the European Union.

Not only did the initiative thereby introduce a unique bottom-up approach of energy and climate actions, but its success soon appeared to outstrip all expectations.

In the meantime, the initiative has come to consist of over 10 000 local and regional authorities spread over 60 countries, each of which benefit from the trump cards of an international movement consisting of several interested parties and the technical and methodological support that is provided by the respective secretarial offices.

The Global Covenant of Mayors makes optimum use of the experience gained during the past eight years, both inside and outside Europe, and continues to build on the most important success factors of the initiative: managing from the bottom, the multi-layered form of collaboration and the framework of action inspired by the context. 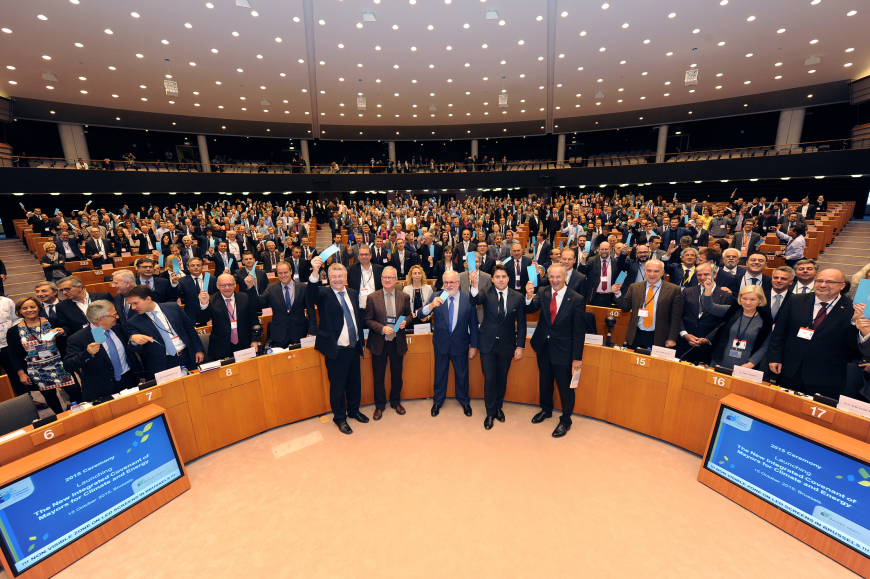 The Signatories share the same vision by 2050: to accelerate making their areas free of carbon dioxide, to arm themselves to be ready for the unavoidable effects of climate change and to ensure that their inhabitants have access to safe, sustainable and affordable energy.

Signatories promise to take action to

To put that commitment into practice regarding actual actions and projects, the Signatories undertake to draw up a Sustainable Energy and Climate Action Plan (SECAP) within two years after the ratification of their signing by municipal council, which contains the principal actions that they want to implement. That plan provides for a Baseline Emission Inventory to monitor the actions to combat climate change, and a Climate Risk and Vulnerability Analysis. (Source: Covenant of Mayors).

This decisive political commitment is intended to be the start of a long-term process pursuant to which the cities report the progress of their actions every two years.

Covenant of Mayors and FutureproofedCities

There are various sectors in FutureproofedCities among which the measures are spread. They coincide with the SECAP template sectors (see our article regarding the difference between measures and actions).

This transition is not yet automatic, but it is compatible at this stage already. The reporting via the SECAP templates are included in the price if you use FutureproofedCities for at least 2 years.

Did this answer your question?